IT’S A CARPENTER BEE, NOT AN ASIAN GIANT HORNET!

When we were out on our deck yesterday, a really large black and yellow hornet kept buzzing and threatening us. We only saw one though. Could this be one of those Giant Murder Hornets from Asia that were just found in the U.S.? The hornet that was threatening you is almost certainly not a hornet (wasp) at all, but given the time of year and the situation, was probably a carpenter bee.  A deck, especially one that is weathered or untreated is a typical place to find a pair of carpenter bees constructing a nest. The nest does not look like a typical bee or wasp nest since carpenter bees hollow out a nest gallery inside wood. You may never even know a nest is there in a deck railing or piece of redwood furniture unless you see the dime-size opening. Carpenter bees are very large, robust bees, but not nearly as large as the giant hornet. With a fuzzy yellow thorax and shiny black abdomen, they’re often confused with bumble bees. Bumble bees, however, have a hairy, not shiny abdomen and live in a colony with other bees. Carpenter bees, like all bees, are beneficial pollinators. They occur singly, or in pairs, and not in colonies.

It was probably the male carpenter bee that was threatening you in his attempt to protect his mate while she hollows out the nearby nest, lays eggs in larval cells, and provisions them with pollen. The good news is that the male doesn’t have a stinger, he’s all bluff. The female can sting but is not easily provoked (see Carpenter Bee Visits Are Brief and Stings Are Rare).

The other good news is that the whole nest-building process is completed in a matter of days. Once the nest is sealed off, the pair moves on and you may not see carpenter bees again for the rest of the summer.

The bad news, however, is that the bees that emerge from the nest tend to nest in the same general area next year, and often pairs of carpenter bees will nest together when they find desirable wood conditions (see Yes, Carpenter Bees Can Nest Again in Your Deck). Repeated nesting by several pairs of bees can result in wood damage. And sometimes, woodpeckers can make the damage much worse when they attempt to reach bee larvae in the wood.

For more on carpenter bees, see What Are Those Big Black Bees?

CALL COLONIAL PEST, WE CAN HELP

If you’re concerned about having pest control technicians at your home at this time, know that we will be employing no-contact measures and following recommended safety procedures (see Colonial Pest Control’s COVID-19 Response). Give us a call! 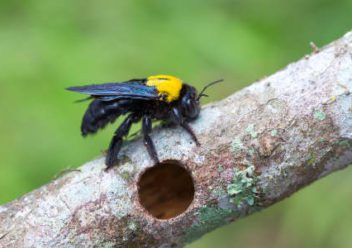