Tips On How To Bat Proof Your Home 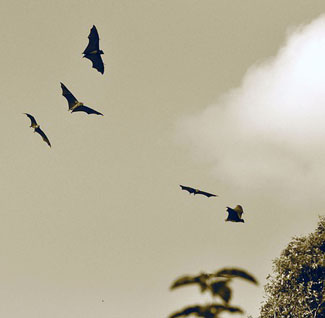 John Maher:  Hi, I’m John Maher. Today, I’m here with Tim Chace of Colonial Pest Control. Tim is an entomologist and a pest control technician. Today, we are talking about tips on how to bat proof your home.

Tips to Bat Proof Your Home

John:  Tim, what tips would you give a home owner on how to bat proof their home?

Tim:  Bat proofing in theory is very simple. You’re just trying to seal up any openings that get into the house. Bats are very, very small and able to get into the tiniest openings, a quarter inch, by half an inch, for some of the smallest species, little bit bigger for the large brown bat. They want to get into these discrete locations to roost over the daytime and then they’ll actually leave at dusk, fly around all night, occasionally resting in discrete locations around the structure during the night, then they all come back.

You’re looking at areas around the roof line, window and door flashing, where conduit enters the house, chimney flashing, ridge vents. Any small gap that’s available should be sealed up and there is a myriad of ways to do this ‑‑ expandable foams, stainless steel screening, sheet metal, pieces of wood, just buttoning up the siding, a long lasting caulking is very effective.

John:  Are there other specific bat exclusion devices that are available?

Tim:  There are in fact. One of the easiest ones is the one way door. It’s typically a PVC pipe with some pieces of screen laid out over it, taped to the end and this is attached to the structure. The bats can go through this device on their way out but they are unable to find their way back in because of the screenings.

That’s one of the most effective tools that we use. Our technicians would generally go out and try and to seal off most of the obvious openings with the exception of what they would call their main runway or their main exit and entry point.

At that point, once they’ve sealed up the house depending on the exact timing of this, when bat exclusion is done you have to be considerate of the young bats that are in there so we really don’t want to seal up any bats inside the house. Most exclusion is in the early spring or in the late fall after August once the baby bats are able to able to fly and feed themselves.

If exclusion is done before that, you’ll likely trap a lot of these animals inside the structure where they suffer and die. We don’t want that.

John:  Because if the baby bats are not able to fly on their own or feed themselves and you get rid of all the mom and dad bats, then they are just left there in the house with nothing to do.

Tim:  The babies are generally born in June and July and they are able to fly within about two or three weeks. They are mammals so they are actually feeding off their mother’s milk. They’re completely dependent on the adult bats until about August when they start to actually leave the roosting area and go out and feed on their own.

That time generally coincides with the beginning of the migration to their overwintering site. Once these guys are able to fly, you can put out the bat tubes and set them up. Our guys right now are moving bat tubes so all the animals have the left the buildings and they are finishing up their exclusion work at those last few entry points.

John:  I should say we’re talking now and it’s December. The bats have already started to move. You said before, when we talked, that the bats tend to overwinter in different places so they move out of the house and maybe go to a cave or something like that where they overwinter. They’re leaving the house, maybe they are out of the house at this point.

If you’ve set up those one way doors and things like that that allow them to get out of the house but not back in — now they are not in the house and now is the time to remove those devices and seal up the house and make sure they don’t come back.

Tim:  Make sure it’s buttoned up. In areas like the edges of the foundation, don’t overlook any opening. You think that bats wouldn’t get in there but they’ll get in there and go all the way up through the siding and get up into the attic or other locations in the wall where they can do their evil work.

John:  If I have a house that I’m sealing up to exclude the bats, should l let my neighbors know that I’ve done that because they might need to do the same thing? Otherwise those bats might come back looking for their home and then go into my neighbors’ house. Would that be a good neighbor to maybe let them know?

Tim:  Sure. It’s always nice to let your neighbors know what’s going on. If you’ve got a big bat colony, there is a chance that they have some bats in their house, too. The bats are pretty indiscriminate. Because bats like to go to the same spot, it’s probably a different bat family but again you are right. Once they’re excluded out of a house, they’re looking for a new location to go to every summer.

How to Deter Bats

John:  Any other tips on how deter bats?

Tim:  Again, the number one way is to actually exclude them out. If you can accomplish that during the construction process of your building, you’re going to be ahead of the game completely. That might entail daily inspections and meeting with your contractor and making specific recommendations to what they’re doing.

Oftentimes contractors do their best work but they are not thinking about bats and mice getting into the structures so if they leave those little gaps and construction flaws, you’re more likely to have a problem.

There is one method to discourage bats that can be very useful ‑‑ naphthalene, moth chips, moth balls — produce a very toxic and irritating chemical. This can be put in attics as a deterrent. The smell of this stuff doesn’t really attract the bats. They don’t prefer it because it’s a poison.

There is some information regarding fiber glass insulation being an irritant to the bats. That can be placed in the areas where they’re trying to roost up in there and they might not like it as much.

John:  They might try to find them a better place for them.

Tim:  For the most part, the best thing to do would be to get a good exclusion program going and that would be some caulking foam, anything you can think of to seal up these areas permanently that we know that they are able to get into. Even if they are getting up under a roofing tile or something, those areas shouldn’t be overlooked.

John:  If you’re having any work done on your house or like you said, if you’re building a brand new house obviously then that’s the time to ask your contractor, “Hey. What can we do to seal it up really tight?” If you have your contractor back to maybe do some maintenance on your house, that might be another time to say, “Hey, while you’re up there on the roof already doing some work, could you take a look and just make I don’t have any, you know, those spaces for bats to get into?”

Tim:  Exactly. In a lot of cases, I’ve found bat droppings that looked old — well, it turns out the house had been re‑roofed a couple years prior to my inspection. At one point, there was maybe some flaw in the roof line that allowed the animals to get in there but the roofing job has solved that. It could be that the chimney flashing or the ridge vent has just a small gap in it.

There was a type of ridge vent that was used in the ’70s and it literally had an open gap at both ends of it. You could see light out of the attic. That’s definitely something that you don’t want to have.

John:  Great advice. Tim Chace, thanks very much for speaking with me.