The Yellowjacket That is Really a Paper Wasp

I thought that yellowjackets nested in a hole in the ground but we seem to have a yellowjacket nest by our back deck under the roof overhang. The nest is a large comb with lots of yellowjackets flying in and out. Is this a normal nest site? M.B., Boston, MA 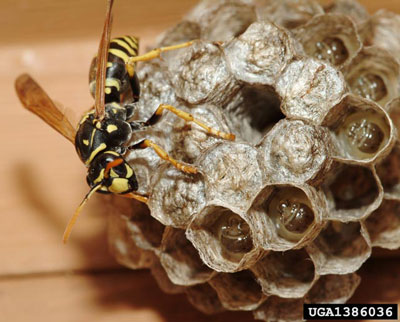 The European paper wasp is a fairly recent European invader. It made its first appearance in the U.S. in Cambridge, Massachusetts in the late 1970’s. Because the northern U.S. presents a climate and habitat similar to Europe, this wasp has colonized our area quickly and successfully, displacing native paper wasps in the process.

The best control for this unusual paper wasp is to prevent spring nest building or destroy the nests early when they contain only a few workers. The wasps will be dying soon as the weather gets cooler, but first the nest will produce next year’s queens. If the wasps are interfering with your outdoor experience, give Colonial a call. We can treat and remove the nest. Unlike other paper wasps, the European paper wasp sometimes reuses its nest the following year so it’s important that the nest be removed after the wasps are killed.