What Makes Those Big, Paper Nests in Trees?

Q. While raking leaves in our back yard, I noticed a huge paper nest high up in an oak tree. We didn’t even know it was there. I did some searching on the Internet and it seems to be the nest of something called a bald-faced hornet. I can’t reach the nest to treat it or remove it. Is there anything I can do (or your company can do) to stop the hornets from nesting there?

A. You don’t need to worry. By fall, the baldfaced hornets are dead or dying, and the nests are not reused the following year, so there is no point in trying to treat or remove the nest. Old nests are eventually beaten up by weather or animals searching for dead larvae inside. Sometimes the used nests drop out of the tree, leaving some kid with a nice item for show and tell at school. Like other yellowjackets, baldfaced hornets build papery nests. While yellowjacket nests are mostly in the ground or in voids in buildings, baldfaced hornet nests hang mostly in trees or shrubs, but can also be found under eaves, in attics, or attached to a building. Nests in trees are usually hidden in vegetation and not noticed until late fall after leaves are gone. A single, overwintering queen began building that nest in the spring. She laid eggs and tended the first batch of larvae that developed into workers. Those workers tend new larvae and expand the nest throughout the summer. A mature colony can have several hundred workers by summer’s end. In fall, the workers die and next year’s queens find overwintering sites.

Baldfaced hornet nests are grayish to brownish, depending on what kind of material the wasps chew to make the “paper.” They will scavenge from vegetable fibers, weathered wood, dead plants, and even man-made cardboard and newspaper. They chew the fibers and mix them with saliva to make a pulp which is painstakingly put into place mouthful by mouthful to form the envelope. Nests are pear-shaped and can grow to be up to 14 inches in diameter and 23 inches long, with  the larger end at the top and an entrance hole near the bottom. If you could tear open the papery outer envelope, you would see several layers of combs inside. Each comb is made up of cells that at one time contained wasp larvae or pupae. 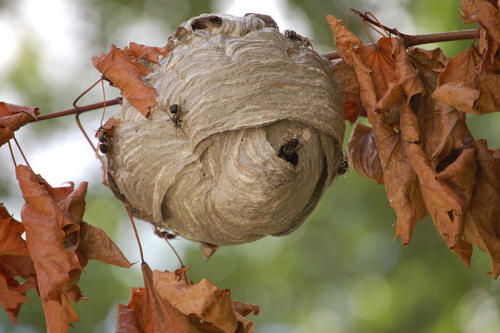 Baldfaced hornets feed on nectar and honeydew from plants, but like other yellowjackets, they will occasionally scavenge on human food. The adult wasps are actually considered to be beneficial since they capture insects (often including other yellowjackets) and spiders to feed to their developing larvae in the nest.

Baldfaced hornets are not much of a threat since their food gathering habits rarely bring them into contact with humans. And, they are more docile than our regular yellowjackets unless their nest is threatened. They can then sting aggressively. The hornets won’t re-use that same nest but it’s possible that you will have another baldfaced hornet nest somewhere in your yard next year. Unless the nest is on a building or is in a location where pets or people, especially children, could disturb it, it’s best to just leave it alone.