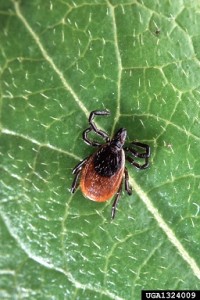 Summer is winding down in the Northeast. Instead of going camping, we’re shopping for school supplies. It’s easy to think that summertime pests are winding down, too, but in the case of ticks, there’s still plenty of biting time left.

Lyme disease is actually a year round threat with most cases being diagnosed in midsummer. You might think that’s just because people are outside more in midsummer and so are bitten more often, but it’s more complicated than that.

Lyme disease is spread to people by the bite of the blacklegged tick. Any of the three tick stages (larva, nymph, adult) can transmit the disease. Each stage must have a blood meal from an animal or a person to be able to molt to the next stage, or to lay eggs. The blacklegged tick has a complicated two-year life cycle where stages overlap, so during summer months all stages can be present and you have more chances of being bitten by an infected tick.

In the Northeast, the blacklegged ticks mate either in fall or early spring. Adult ticks spend the winter in a protected place. It is during the months from late December to late March that Lyme disease risk is lowest. Only larval ticks and last year’s adults are present at this time and they are relatively inactive when temperatures are below 400 F. In early spring, the mated female tick feeds on an animal, usually a deer, then drops off to lay eggs.

The eggs hatch in late summer into very tiny 6-legged tick larvae which remain near the ground so they can feed on white-footed mice or deer mice. If the mouse they feed on is infected with Lyme disease, the larval ticks may become infected. Tick larvae spend the winter and molt into nymphs in the spring. Nymphs feed from spring to fall on somewhat larger animals and can pass the infection on to these hosts.

Nymphal Ticks Are Active Until Fall

The nymphal stage is responsible for most cases of Lyme disease because (1) the nymph is more likely than the larval stage to feed on people, (2) it is smaller and harder to see and remove than the adult tick, and (3) it is most active in midsummer when people are outside. In early summer, last year’s adult ticks may also be present but die shortly. By fall, this year’s nymphs have molted into adults preparing to spend the winter.

The take home lesson is that there is really no time of year when you can let down your guard against Lyme disease. You can have an encounter with an infected tick at any time of year. You need to take precautions against ticks until the weather is permanently cold (see Protecting Your Family From Ticks – Advice From the Pros).