We just moved into a new house, new for us anyway, it’s about 15 years old and we’re worried that we might have termites. We discovered several sets of dirt tubes on the back of the house under the roofline. The tubes are about 6 inches long and attached to each other. Some of them have holes on the outside. I read that termites use mud tubes to reach wood. What do we do now? G. O., Windham, NH

First, relax… I’m quite sure that what you’re seeing are not termite tubes. Based on your description, I would say that the tubes are the nests of mud dauber wasps. Take a look at the picture with this blog and see if it looks like what you saw. These are the nest tubes made by the shiny black organpipe mud dauber wasp. Termite tubes are narrower, usually longer, usually single, and usually near ground level on a building. See What Are Those Mud Tubes on My Wall? for a photo of subterranean termite tubes.

The location you mention is a typical mud dauber nest site. Mud daubers prefer to build their nests on wood surfaces in shady, protected areas like under porch roofs, under eaves, in sheds or attics. Different females may build nests in the same general area on your home.

HOW DO THE WASPS BUILD THOSE MUD NESTS?

A single female wasp collects mud, mixes it with saliva, and plasters many mud globs together to build her nest. Each tube contains several chambers or brood cells and the female wasp collects spiders which she stuffs into the chambers for her larvae to feed on. She lays an egg in each chamber, then seals off the chamber. The entire nest may consist of several tubes attached side-by-side.

Mud daubers are among our most docile wasps. They’re not social wasps, a single pair builds the nest. Mud daubers are not aggressive, they don’t defend their nests, and they rarely sting. They don’t stay with their nests either. Once the tubes are constructed and provisioned, which may not take much more than a day or two, the wasps move on.

The holes you see in the tubes are where the adult wasps emerged after completing their development. Those tubes could have been there for some time, even a couple of years. Tubes without holes may contain larvae or pupae. You can easily scrape off the mud tubes with a putty knife, don’t use water or you will end up with mud again! If the nests still have larvae, you can see them and the spiders on the open back side of the tube. You might want to give us a call to safely remove the nests if they are high up on your house. We can also treat the area to discourage future nesting by mud dauber wasps.

For more on the interesting habits of mud daubers, check out these Colonial blogs: 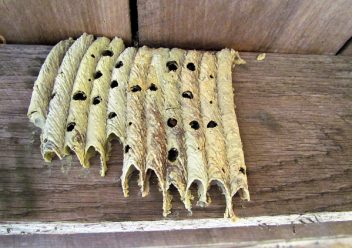 The holes indicate that wasps have emerged from the tube nests