COCKROACH EGG CASES – ARE THEY OLD OR NEW?

We just moved into an apartment that was painted and supposedly sprayed for pests before our move-in. But now, as I’m putting things away in kitchen cabinets I’ve found a few small, brown, oval, papery things in corners that someone said were roach egg sacs. Yuck! I haven’t seen any roaches but does this mean that some could hatch out from unseen egg sacs?

If what you are seeing are indeed cockroach egg cases, we couldn’t rule out hatching. It would depend on many variables, including how long the apartment has been empty or roach-free.

The most common cockroach in apartments is the German cockroach. The egg case of the German roach takes 2-3 weeks to hatch and contains 30-48 developing baby roaches. If you opened the egg case up like a suitcase, you would see 15 to 24 cockroach nymphs lined up on both the top half and the bottom half.

The German roach female carries her ¼-inch long egg case protruding from her abdomen until a few days before hatching and then deposits it in a protected place. (Most other cockroaches deposit or “glue” their egg cases in a hidden location right after they are formed.) German egg cases, therefore, would not normally be seen away from the roach mother unless they are about to hatch.

So, unless there was a very rapid turnaround between tenants we could assume that any egg cases you found are old and have already hatched – unless there are still cockroaches present in your apartment that have left egg cases recently while the unit was vacant.

Baby roaches inside egg cases are somewhat protected from insecticide sprays or fogs so the pest control service wouldn’t necessarily have killed the next generation. The cases could hatch but newborn roaches may still die if there is any insecticide residue remaining on surfaces. 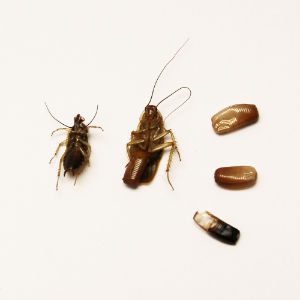 There is a way to tell whether a cockroach egg case has already hatched or is still viable (capable of hatching). When ready to hatch, the case splits apart at the side seam and the baby roaches emerge. An egg case that has already hatched or is no longer viable because it has dried out or has had direct insecticide exposure will appear collapsed or dented and no longer plump and full.

The best thing to do now is to remove and discard any egg cases that you found at move-in and keep an eye out for new cases, or for other evidence of cockroaches such as shed nymphal skins, dead roaches, or black roach poop.

If you find any evidence of cockroaches, don’t delay in notifying property management and scheduling pest control service. If you read the details above, you know that a single egg case can result in a lot of new roaches! And a single female German cockroach will produce 4-8 egg cases in her lifetime.

For more information on cockroaches and their egg cases, see: