The biggest, baddest looking wasps in New England may not necessarily be the most harmful, as it turns out. Aggressive wasps species that we regularly deal with are not the largest. YellowJackets and Bald Faced Hornets are typically the two types of aggressive wasps that cause bodily harm to humans in Massachusetts and New Hampshire. Paper wasps may sting, but are less likely to go out of their way for an attack, and are usually provoked or irritated close to the nest. Honey bees and bumbles bees are rarely aggressive towards humans.

Wasps are in the Order Hymenoptera, as are bees, ants, and sawflies. Different from sawflies, wasps and ants have a distinct “wasp like waist,” and wasps are primarily flying insects. Ants do have some segments of their colonies which produce flying or swarming ants, generally of the reproductive caste. Sawflies do not have the typical thin segment between the thorax and abdomen which is an otherwise distinct characteristic of wasps, bees, and ants, although bees tend to be a bit more bulbous than wasps on average. Bees’ diet differs from wasps, eating a more vegetarian diet of pollen and nectar. Wasps consume sugars from plants and do aid in some degree of pollination, but are meat eaters at heart. As with their hymenopteran relatives, ants, the larvae are the “stomach” of the colony. Adult wasps feed on foods high in sugar and carbohydrates, such as fruit and plant nectar. This is no surprise to you if you’ve served watermelon at a cookout with a Yellowjacket nest nearby! The adults will also grab as much protein as they can, wether it’s from your grill, open meat, fish, caterpillars, flies, or other insects. This food is brought back to the brood of young larvae and fed to them, partially chewed. In turn, the larvae share back a nutrient rich liquid to the adults. German yellowjacket wasp, Vespula germanica, chewing on a sockeye salmon carcass to remove pieces of flesh to take back to its nest to feed to developing larvae.

Wasps in the family Vespidae, genus Vespula are commonly referred to as YellowJackets (or Yellow Jackets). German Wasps or German Yellowjackets (Vespula germanica) and the Eastern Yellowjacket (Vespula maculifrons) are common wasp pests in New England, especially mid to late summer. Colonies generally do not survive the cold, and wasps will not reinvest a dead nest. Yellowjackets are especially equipped to nest in the ground or inside of wall voids in homes. The ground nest may be built by taking over a chipmunk hole, for example, and expanding out. Yellowjacket nests must be treated directly to eliminate them, however using a wasp trap device may help to limit the population in an area. Using these traps early in the spring and late summer when the queens are looking to build their humble beginnings of a nest and hatch their first brood, you may catch her and prevent a nest from occurring in the first place. See IT’S NEVER TOO EARLY TO CONTROL YELLOWJACKETS

Domed-over, exposed paper nests, or carton nests, are build on structures, in trees and bushes, or anywhere else they can build and stay relatively protected. A Yellowjacket typically measures in at 3/8-5/8 inch. Their aggressiveness increase as human approach the nest, but they don’t often attack when they’re foraging for foodstuff. If they feel threatened, especially near the nest, these wasps can inflict painful stings. And unlike honey bees, they do not have barbed stinger, so stings can recur without killing the wasp. A bee has a barbed sting which pulls out when they sting, resulting in death. Often, this stings occur when doing yard work. The vibration of the lawnmower irritates a ground nest, and we often arrive to treat the nest to find an abandoned push mower with short grass behind it, and tall grass in front of it. That makes it easy to find the hole! Sister genus to Vespula, Dolichovespula, commonly known as Bald Faced hornets, are a cousin to our Yellowjacket wasps. These large hornets do not nest inside of voids in the ground, but make gray paper carton nests, often hanging on trees or under the awning or soffit of structures. Bald Faced Hornets, also known as White Faced Hornets, are not true hornets, but commonly known as such due to their propensity to build their nests on elevated locations. The name actually reflects their relative length is larger than that of vespula (Dolikhos means long in Greek), with BFH measuring in from 1/2-5/8 inch on average. BFH can also sting multiple times without self-inflicted harm. Their understanding of the their territory may also be more expansive than one might think. Bumping into a bush with a nest in it, or walking in front off a flight path may be enough to stir the colony. Once agitated, the wasps send out signals to the others nearby to attack the predator (you). See What Are Those Big, Black and White Wasps?

The genus Polistes is one of the most common and plenty of wasps in our area. Active from spring through the summer and well into the fall, paper wasp species are numerous, as are their coloring. Largely distinguished by their noticeably think waist, long dangling legs, and smallish “umbrella” nests with exposed cells for their young, paper wasps are not terribly aggressive by nature. The most common paper wasps, the brown northern paper wasp and the European paper wasp, are semi-social insects. Each female is capable of being her own queen, moving out of one nest and building another, so that total remediation by knocking down nests is difficult.  The European paper wasp is often mislabeled as a yellow jacket, due to her black and yellow markings. These are not aggressive wasps, but will sting if directly provoked. Typically, they are just trying to gather food to feed the brood, and generate enough energy to build new nests. Now we get to the big ones! Cicada killer wasps are always found when and where there are Cicadas. Cicadas are in an order of true bugs, called Hemiptera. They are best known by their buzzing sounds high up in the tress on hot summer days and evenings. They occasionally make the news and garner recipes when their more famous cyclical broods emerge. Cicada killer wasps go into the trees, grab a cicada, paralyze it with a sting, and bring it down into a pre-dug hole into some sandy soil for their young to feed on as the larvae grow. As frightening an end for a cicada as that may sound, Sphecius speciosus are relatively harmless for humans. Treatment for these includes direct treatment into the soil as well as localized spraying to attempt to dissuade more digging. during service, neither I nor any of my current staff of experts has been attacked by these large 2 inch wasps. Ultimately, discouragement of the digging and nesting behavior should be done holistically, minimizing sandy soil and generating a lush root bed to make it difficult for these wasps t9o kick up sand and make their holes. Regular watering of known digging sites in the yard will often discourage the behavior as well, basically annoying the wasps until they move elsewhere. See CICADA KILLER WASPS ARE A THREAT ONLY TO CICADAS Here we have our only actual Hornet is New England! Vespa crabro is a true hornet species, a night forager, and a lookalike in most aspect besides size to our German Yellowjacket. Nests are usually built in voids found in nature, especially in hollows of trees. the relative remote nature means human interaction and attacks are not as common as with Yellowjackets and bald faced hornets. European hornets are largely carnivorous, similar to the other wasps we have already discussed. These 1-1.5 inch wasps are also frequently found foraging for fallen fruit. If a void presents itself nearby, these will not hesitate to build a large nest within proximity to a good food source. They will often “ping” of illuminated garage doors and windows at night while they’re foraging, alarming homeowners. Less aggressive than NFH and YJs, European Horner can still deliver a painful sting if they feel threatened, so it is best to let a professional with the proper protective equipment handle the situation should they occur. See The European Hornet is One Large Wasp

Giant hornets are another very large wasp we occasionally see in our areas. Not to be confused with the Asian giant hornet, these large wasps have been around since the early 1800s in New England, but are not prolific enough to be noticed by many. Also known as the European Giant Hornet. EGH differs from its Asian counterpart in a few key characteristics. The European Giant Hornet has a mild temperament and is rarely in the news for causing trouble. It has a darker head than the Asian Giant Hornet (Murder Hornet), has a dark band just after the waist on the abdomen, and has the yellow jacket like teardrop patterns on its abdomen versus the bands on that of the AGH. EGH should not be considered an aggressive species towards Honey Bees either, and rarely do humans have negative encounters with them. 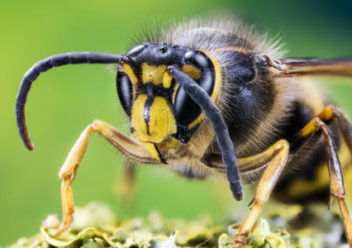