I think I saw a baby rat in our basement under the workbench. Got a good look at it when I chased it out: about 4 inches long including its short, hairy tail, really tiny ears, and a more pointed snout than I thought rats had. Do you think it was a young rat? I’m pretty sure it wasn’t a mouse. I left the basement back door open for a while and I think it’s gone now.

Your description doesn’t really sound like a brown rat, baby or otherwise. Rats have a naked tail, obvious eyes, and quite visible ears. I’m wondering if you met up with a shrew. Shrews have tiny, beady eyes, almost invisible ears, short legs, and velvety fur. Few people have even seen a shrew, but for some reason, we are getting more calls about shrews getting inside homes.

SHREWS ARE NOT CLOSELY RELATED TO MICE OR RATS Shrews are really outside animals that look somewhat rodent-like but don’t even belong to the rodent family. Shrews, like moles, are insectivores so their primary food is insects. They’re voracious eaters and can be quite nasty and vicious predators. A shrew can easily eat its weight daily in insects, worms, spiders, slugs, and other small creatures. So, they’re actually beneficial.

Normally, shrews are found nesting in logs, stumps, or using abandoned mole or vole burrows. They don’t hibernate and remain active day and night all winter long, so you could find one inside at any time. They usually won’t remain inside (unless they can’t find a way out) because of a lack of nest sites and food indoors.

WHAT IS A SHREW DOING INSIDE? Common shrew peeking out of a tree hollow. Shutterstock.

This is an interesting question and we can speculate. An animal with the appetite of a shrew would probably not invade any new area unless food was involved. Shrews may be entering houses in pursuit of crickets, spiders, centipedes, or perhaps fall-invading insects such as lady beetles or seed bugs that, in turn, are entering houses to spend the winter.

Shrews will occasionally feed on mice or snakes so they could be following these animals inside, especially in the fall. In winters, shrews might supplement their insect diet with roots, nuts, or seeds and perhaps they are finding this more vegetarian fare stored in a basement or garage. In extreme weather, shrews may just be trying to escape excessive wet or cold conditions outside.

There’s still one more situation that can result in a panicky shrew running around the living room. Cats or dogs have been known to proudly carry in a shrew captured outside. In one case, the owner of a strictly indoor cat found the cat playing with a live shrew inside. That was surprise enough, but two days later a second dead shrew appeared inside, closely guarded by the cat!

The indoor cat did have access to the closed-up garage through a pet door. The best guess is that the shrews were finding their way into the garage, probably through gaps around the garage door, where the cat was happy to greet them!

HANDLE SHREWS CAREFULLY OR, BETTER YET, NOT AT ALL

If you come face-to-face with a shrew and are inclined to remove it, do so very carefully and wear heavy gloves. Shrews are aggressive with very sharp, pointy teeth and have been known to bite people, pets, and birds at bird feeders (see Don’t Try Taming a Shrew!).

Shrews can also emit a foul, defensive odor if you mess with them. Best advice is to give Colonial Pest a call instead. We can trap and remove the shrew and can even help you figure out how, and maybe why, shrews are getting into your home. (P.S. Ask the cat.) 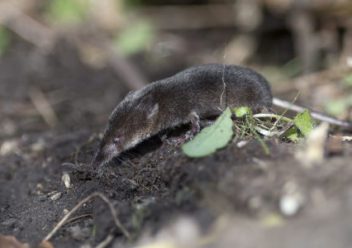