We have yellowjackets building a nest under an overhang near the back door of our house. Is this normal behavior for yellowjackets? We’ve only seen them come out of the ground before. We knocked the nest down once but I guess they rebuilt it. What should we do? W. G., Raymond, NH

I suspect that the wasps in question are not yellowjackets at all, but are instead European paper wasps. If the nest is a single, open comb where you can see the individual cells, then you are dealing with paper wasps. Most yellowjackets do nest in the ground but some build aerial nests in trees, or nest in or, less often, on structures. The multiple combs of these yellowjacket nests, however, are usually covered with a papery shell.

HOW TO TELL A PAPER WASP FROM A YELLOWJACKET

The European paper wasp, Polistes dominula, has black and yellow markings and looks very much like a yellowjacket (see The Yellowjacket That is Really a Paper Wasp). There are a few clues to help tell the two wasps apart: (1) If you see the wasp in connection with the nest, you can tell from the open comb/nest style when it is a paper wasp, (2) paper wasps have a thin “waist” connecting the thorax and the abdomen; the waist connection is not as obvious on yellowjackets which are slightly more robust, (3) the European paper wasp has rust orange antennae while yellowjacket antennae are black, and the paper wasp has orange-tinted wings to match its antennae, (4) paper wasps have longer legs than yellowjackets and the legs dangle beneath them when they fly.

Paper wasps of any species are less aggressive than yellowjackets, but like the wasp it mimics, the European paper wasp is more aggressive than other paper wasps. Usually paper wasps are not a problem unless the nest is in a location where people or pets might interact with the wasps – they will defend the nest if they feel threatened. If someone in the home has a reaction to wasp or bee stings, you don’t want any nests in the vicinity. A nest under construction near a doorway does not sound like a good idea.

NEST DESTRUCTION WORKS BEST WHEN THE NEST IS NEW

Nest destruction actually is a good way to remove paper wasps. This is obviously easier and safer to do when there are fewer wasps connected with the nest. When a nest is new there may only be a few wasps and there will be times when all of them are out foraging and the nest can be knocked down in their absence, assuming you can safely reach it. As the nest grows in size and number of cells during the season, the number of worker wasps increases as well.

Since you’ve already tried the nest destruction approach, give Colonial Pest a call. Our experts can quickly and safely remove the nest (even if it’s out of reach) and any wasps present. We can also treat the nest site to prevent any remaining wasps from trying to rebuild in the same vicinity (see Why Do Wasps Like My House?). At the end of the summer, a paper wasp nest produces next year’s queens. These queens usually spend the winter nearby, sometimes even in your attic, and start their own nests the following spring. So eliminating the nest now should also help reduce the number of wasps and nests around your home next spring. Call Colonial Pest. 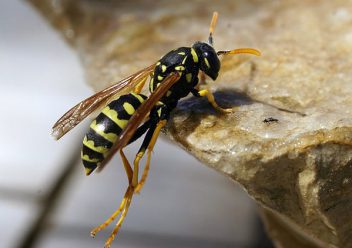