Where Are Indoor Yellowjackets Coming From?

We keep finding yellowjackets inside our house mostly in my son’s bedroom. We find one or two every day and he’s afraid to sleep in there now. We can’t figure out how they’re getting in or how to keep them out. B. W., Derry, NH

The best guess, without an inspection, is that there is a yellowjacket nest very nearby, perhaps in a tree just outside his bedroom window, or under the roof eaves, or in the worst case scenario, yellowjackets could be nesting inside the walls of the room. Another possibility is that the yellowjackets are really European paper wasps which look very similar (see The Yellowjacket That is Really a Paper Wasp). In that case, there would be a nest near the bedroom on the outside of the house. [Note: If it was winter or very early spring, the visitors could be wasps that had been spending the winter in the attic.]

The easiest answer is that a bedroom window is being left open or that the foraging wasps are finding their way in through a torn screen or gap. An outside observation by an exterminator should be able to track the wasps to the nest site, wherever it is. Then, treatment and removal of the nest should solve the problem. If the nest is outside in a tree or bush, under eaves, or even in the ground, the nest itself can usually be fairly easily treated (see Where Do Yellowjackets Nest?).

If the wasps are nesting inside wall or ceiling voids, inspection and control becomes more involved (see Yellowjackets Do Nest Inside Homes). They build their papery comb nest, usually in a wall void, and come and go through an outside opening. Yellowjackets could be finding their way from the void nest into your son’s room through an opening such as a wall register or an opening around an outlet or switchplate, or through a ceiling light fixture.

Dealing with a void nest requires a pest control professional, first to locate the nest within the walls (not an easy task), then to determine the best treatment approach. Deciding whether or not to remove the treated nest from the void is another issue (see Dealing With a Wasp’s Nest Inside a Wall). Give us a call. Our experts can identify the wasps, then track them to find the nest site. Whether the nest is easily accessible or not, we guarantee to eliminate the wasps from your home. Call Colonial Pest! 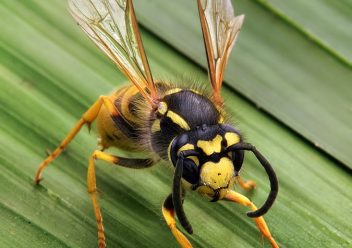