I’ve seen a couple of black bugs that look like beetles around our basement door. When I tried to pick one up for disposal, it released this nasty smell. Do you know what these are? Did they come in from outside?

There are a few possibilities, but my best guess is that you saw a couple of ground beetles. And, yes, they did come in from outside, probably through gaps around that basement door.

Ground beetles are what we call “occasional invaders.” They are outside insects that occasionally end up inside buildings, usually by accident. They’re very common outside around building foundations where they spend the day hidden under stones, wood, leaves, or in soil or debris. At night they come out to feed on other insects. Ground beetles are actually considered to be beneficial insects since they feed on plant pests, caterpillars, and snails, among other pests.

There are more than 2,600 different species of ground beetles (beetle family Carabidae) and they come in a range of colors and sizes, though most are around ½ inch long. Because they’re usually shiny dark in color, have long legs and antennae, and run quickly, people sometimes confuse them with cockroaches. Ground beetle larvae are also predaceous but are rarely seen since they develop in soil or debris.

Outside Lights and Openings Let Them Inside

Ground beetles usually end up inside because many are attracted to lights and can be found at porch or yard lights where they feed on other insects also attracted to lights. They wander inside if they find a suitable opening such as torn screens, door gaps, or openings around utility conduits (see Ground Beetles Can Become Indoor Pests). They don’t bite or do any damage inside but, as you know, some can release a foul defensive odor if handled or threatened. They usually don’t survive long in the drier indoor air.

Keep Ground Beetles in Their Place, Outside

You can keep ground beetles out of your home by making sure that you have door sweeps, screened vents, and by reducing or moving outside lights away from doorways. If necessary, you can reduce their numbers around the outside of your home by limiting ground beetle hiding places. Clean up leaves and debris around the foundation, move wood and stone piles, and reduce mulch around foundation plants. You might also consider an exterior pesticide application around the perimeter of your home. Contact Colonial for more information. 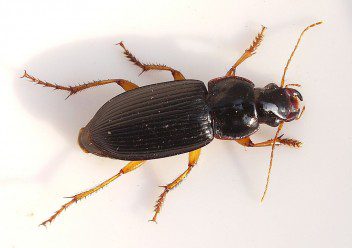