My son buys mealworms from the pet store to feed to his pet lizards. Those worms creep me out because they’re so large and wiggly. I’m always worried that they’re going to escape and infest my house. Could they do any damage in a house? Where do they live normally? 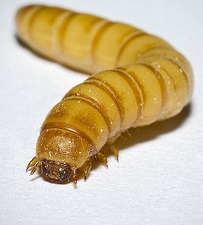 Mealworms are insect larvae and can be found outdoors in dark, damp places where they scavenge on decaying organic materials, including plants and dead insects. Indoors, they can be pests of stored foods such as cereal, cornmeal, oatmeal, flour, dry pet food, and other products made with grain.

We almost never see mealworms as pests in a home, but they are pests in facilities that store or process grain. Even in these sites, they are not major pests because they rarely feed on clean grain that is food quality. They prefer grains that are old and moldy, and so they are found in dark, damp, musty sites where there is damp grain spillage. In addition to moldy grains, mealworms will also feed on meat scraps, dead insects, and feathers. They can become pests in poultry houses.

Mealworm larvae are large, about 1 inch long when fully grown. They are yellowish-brown, and cylindrical with a hard outer shell. Mealworms develop slowly, it can take the larvae 6 to 9 months to become full-grown. You’ll probably be surprised to know that the adult form of the mealworm is a large (about ¾ inch), black beetle. The beetle is most active at night and may fly to lights.

Mealworm larvae have short legs and both adults and larvae tend to wander away from their food sources. Even so, the chances of mealworms infesting anything in your home are slim. It’s unlikely that a runaway mealworm could find a suitable food in a suitable location, unless you have an old bag of moldy pet food stored in a damp crawlspace! It’s important though that your son uses up the mealworms before they have a chance to pupate and turn into adult beetles since it is the adult female that will be looking for suitable foods to lay her eggs in.

Final Note: Some people advocate the use of mealworms as a nutritious human food. They’re high in protein, low in carbs, and inexpensive. After all, if they’re good enough for your pets…!