Should You Remove That Wasp’s Nest Now? 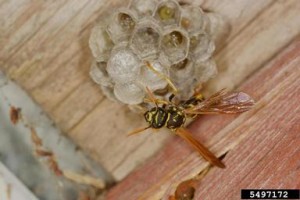 My son has discovered a wasp building a nest up near our back porch roof. He’s really fascinated watching the wasp add paper to the nest, but I don’t know if we should let it continue. Will the wasps get aggressive and apt to sting one of us? How would we remove the nest? M. C., Woburn, MA

Whether that wasp’s nest is going to be a problem will depend on what type of wasp we are talking about, the exact location of the nest (how close it is to human activity), and whether or not the wasps will feel threatened at any time.

A Paper Wasp’s Nest is Distinctive

Based on your description of the nest location, I would guess that you are dealing with either paper wasps (most likely), or baldfaced hornets or aerial yellowjackets. All build papery comb nests, sometimes on buildings. Just looking at the nest should tell you which wasp is doing the building. A paper wasp’s nest is a single layer open comb that looks like an umbrella without a handle. A hornet or yellowjacket’s nest is made of several combs completely enclosed by a gray/brown papery covering that is pear or ball-shaped (with an entrance hole at the bottom), although a nest under construction can look quite different.

In any case, a single female wasp begins the nest in the spring and cares for the first batch of young. Soon though, there will be more worker wasps that will continue with the nest building and care while even more wasps are added. If it’s a paper wasp nest, it will never get too huge, usually less than 100 wasps. A baldfaced hornet or yellowjacket’s nest though could end up with hundreds or thousands of wasps by summer’s end and can be as big as a basketball.

As far as safety concerns, I wouldn’t want a wasp’s nest on my porch when it contains lots of wasps. It’s possible that you could coexist with either nest if it is away from a doorway or any activity. The wasps won’t attack unless they think the nest is under attack, but sometimes it doesn’t take much for them to feel threatened. With children or pets around, it’s not worth the risk.

It’s always easiest to remove a wasp’s nest early in the season when there are fewer wasps present. If it’s still small with only a couple of wasps present, you can wait until they are away from the nest, then knock it down. If the wasps are not killed, they will probably try to rebuild in the same spot, so a shot of a general purpose insecticide spray to the site may discourage that. If the nest is larger, I strongly encourage you to contact a professional exterminator to do the job. Give Colonial a call; we’re happy to help.