Managing Mice In Your House 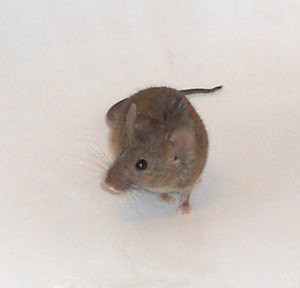 Signs of Mice in the House

Katlyn:  Thanks for joining us today. Today, we’re talking about mice. How do I know if I have mice in my house, Tim?

Tim:  Mice can present a number of different symptoms. One of the more common things you’ll see is little black spindly droppings, maybe underneath the sink or in the silverware drawer, up on the counters.

Another indication of mice might be intermittent chewing or tapping noise in the wall, where a mouse is chewing his nut or scratching in the wall, moving throughout the structure. Those can be some indications of a mouse issue at large.

Why do mice come into houses?

Katlyn:  Gosh, hearing it run around in the ceiling. Why do mice come into houses?

Tim:  Mice enter the house for a number of reasons. Like all creatures, mice need to have a place to shelter from the outside world, get away from predators, and if it’s a little bit warmer, they can do quite well. In the colder months, mice actually suffer from hypothermia outside. If a mouse can get inside the house, it can actually go to sleep.

They also store food inside the structure and may also find food sources within the structure as well. Your home is a very inviting spot for a mouse.

Katlyn:  If I realize I have mice, I have a problem that I can’t handle and I call you, what do you do?

Typically, that will be around garage door frames, the bulkhead, an unfinished door in the cellar, places where the air‑conditioning or gas lines go through the wall, corners where there’s a construction deficiency, even chimney flashing, or places up on the roof could allow mice to enter the structure.

There are very small openings throughout the house that need to be paid attention to. We also would use bait products to potentially minimize the population while we’re doing this. The main focus of our mouse control would be to knock down the population at large in the structure, and then do what we can to prevent new mice from entering.

Usually, that process is pretty successful. We get out results within about two weeks from the treatment. In most cases, we can solve your mouse problem pretty easily.

Katlyn:  Great, you said population. How many mice do people have in their houses? What’s typical to see?

Tim:  It’s difficult to ascertain the level of most population within a structure, but you can get a feeling for it. A large mouse population might have an odor inside the house. You could actually smell the mice themselves. A large buildup of droppings ‑‑ if you’re actually seeing mice run around the structure, that’s a bad sign.

Tim:  Mice don’t like to interact with each other, they have territories within the house. You can have a substantial number of mice, even if you don’t see some, but once you start seeing mice running around, that indicates that you’ve got a good size population.

Katlyn:  Oh, gosh. You put out this bait that the mice then eat, are they going to die in the walls, or what happens to them?

Tim:  That’s a great question. Whenever we use bait products, there’s a potential that a mouse could die in a inopportune location such as a wall, void, or up in the ceiling. There’s usually a small amount of odor associated with the liquid material, volatilizing from the mouse. Once the mouse dries up and the little cadaver is dry, there’s really not a lot of smell after that.

However, if you have a substantial amount of dead mice, there can be quite an odor. That sometimes is an issue.

Katlyn:  What do you do then? Have you ever had to go into walls?

Tim:  From time to time, we’ve been able to find mice, maybe on a suspended ceiling or you’ll find a dead one under the refrigerator. As a rule, we generally don’t recommend digging into the wall to find these dead mice, because they might be just about anywhere, and the smell is coming out of a light socket or some moldings. t may be difficult to locate the mouse without doing substantial damage to the structure in your search for it.

Dangers of Having Mice in Your Home

Katlyn:  Good tip. I’m sure you’ve run into people who don’t think mice are a problem, who are perfectly OK with living with mice. What is the danger of having mice in your house?

Tim:  First and foremost, mice carry a lot of diseases. Fleas, tics, tapeworm, there’s a number of things that can be spread through the urine and droppings, the hantavirus being one. As mice move throughout the structure, they’re defecating and leaving their little fecal pellets all over the place.

Mice urinate frequently and with no control, so wherever he’s walking, he’s urinating. They’re also walking in unkempt areas of the structure, so they could be picking up other bacteria and diseases and carrying that on their body wherever they move.

Another issue with mice is actual physical damage, things like gnawing on water pipes, cables, electrical equipment, things like washing machine controllers, air conditioning, irrigation controllers. All of those things sort of resemble little vines and things that the mice would naturally chew. They always chew these things and they can cause extensive damage and even unknown origin house fires, so it is a serious issue to have mice in the house.

Katlyn:  Definitely. Now, are mouse traps an old‑fashioned tactic that nobody uses anymore?

Tim:  Mouse traps can be a very important part of a control process. Typically, they’re a little bit more work to use, because once the mouse is on it, he’s got to be removed from the trap. Some folks don’t prefer mousetraps, because they’ll actually see the dead animal.

But any kind of trapping can be used in a control management process for mice. We sometimes use that, in the case of high population, when we want to just get as many as possible right away. That can be a valuable part of a management program for mice.

Katlyn:  Great. A management program for mice. You need one. Well, thank you, Tim, so much for joining us today. Tim Chace, pest control technician with Colonial Pest. Thank you so much for coming in, Tim.