Why Do Wasps Sting? 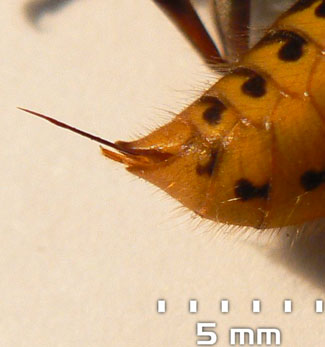 Stinger of an european hornet

A simple question, with a complicated answer. Yellowjackets and other wasps use their stingers for two purposes: (1) to incapacitate their insect prey, and (2) to help defend the nest against invaders. Solitary wasps, like cicada killers and mud daubers, do not have the same incentive to defend the nest as do social wasps that live in colonies. Therefore, most wasp stings to people are from social wasps like yellowjackets, baldfaced hornets, paper wasps, or European hornets.

The Sting Keeps Animal Invaders Away

Social wasps that live in large colonies will coordinate their efforts and will use their stinging abilities in a mass attack on any animal (or person) that threatens the colony. They will attack aggressively and can sting repeatedly. Many animals like skunks and raccoons will attempt to dig up yellowjacket ground nests in order to feed on the fat, juicy larvae inside. The wasps are initially alerted to the presence of a predator by vibrations. This is why people mowing lawns are often attacked by ground-nesting wasps (see What Should You Do When Wasps Attack?).

As wasp larvae are developing in their individual cells inside the nest, workers forage to find insects or spiders to feed to the larvae. A yellowjacket will grab a fly or a caterpillar with its legs and jaws and will either kill it with its jaws or will sting it to inject a paralyzing venom. It then trims the now docile prey to a more manageable size, often carrying only the victim’s thorax back to the nest.

A wasp’s stinger is actually a modified ovipositor with an attached poison sac. When a person is stung, venom from the poison sac is injected into the victim. New research has shown that yellowjackets often leave their stinger behind in the victim, just like bees. The venom contains histamine, amino acids, and enzymes. The reaction to the sting varies depending on how much venom is injected and how sensitive the person is to the venom (see First Aid for Bee and Wasp Stings).

Most people have had some experience with the business end of a wasp. If you’re honest about the circumstances, you’ll have to admit that you provoked the wasp first either by accidentally stepping on it, sitting on it, swiping at it, or coming too close to its nest (maybe you didn’t know the nest was there, but the wasps definitely knew you were there). Although it sometimes seems to be the case, none of our wasps, including yellowjackets, seek out people or go after people to sting them just out of spite.