What Are Those Mud Tubes on the Outside of My House?

My son just discovered about a dozen sets of mud tubes on the outside wall of our garage near the roof overhang. The tubes are attached side by side and some of them have holes in them. Are these termite tubes?—L.M., Sterling MA 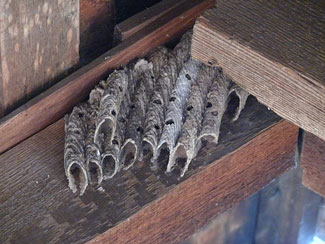 No, they’re not termite tubes, they are nests made by mud dauber wasps. Since their tubes are stacked side-by-side, they are probably those of the organ pipe mud dauber. Mud daubers are solitary wasps, they don’t live in colonies like yellowjackets. Only a single pair of wasps construct the mud nest. The reason you haven’t seen any wasps around the nests is that nest building is probably completed for this year. Inside the mud tubes are wasp larvae that are feeding on paralyzed spiders left by mom. When the larvae are fully developed, they pupate and turn into adult wasps. They then chew their way out of the mud tubes, leaving a hole behind.

In Massachusetts and New Hampshire, mud dauber wasps emerge from their nests in mid-summer. The nests that already have holes in them are probably left from last summer, or even the summer before. Once mud daubers find a good, protected place in which to build nests, they tend to come back to the same site time after time.

These Wasps Are Rarely a Problem Needing Control

Mud dauber wasps usually don’t need control unless they are directly interfering with people. Although they can be noisy when they are hauling mud to make their nests, mud daubers are not very aggressive. By the time people notice the nests, they are usually completed and the proud parents have moved on. If you can reach the nests, you can simply scrape the nests off with a putty knife. You can have the site treated by a professional exterminator if you want to prevent mud daubers from nesting in the same place again.

If you want the nitty-gritty on the interesting nest construction process, check out this blog – “How Do Mud Daubers Build Their Nests?”