I thought bug season was finally over, but we’re finding these black and red bugs all over the south side of our house and some of them are getting inside. What are they and why are they active now? 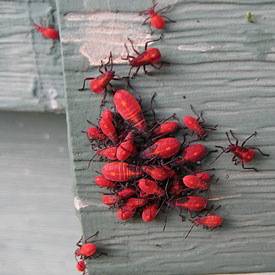 Sounds like you have boxelder bugs. Although it’s late fall, this is a prime time of year for boxelder bug calls because they do not become pests around homes until they move inside for the winter. During spring and summer, boxelder bugs are outside, living and feeding on boxelder trees, and rarely noticed.

But in fall, they start to move off of the tree, looking for sheltered places to spend the winter. If you have a female boxelder tree on your property (or sometimes on your neighbor’s property), you can end up with boxelder bugs on or in your home.

Boxelder bugs are black with red-orange outlines, and pretty noticeable since they are about ½ inch long. The young nymphs are solid red. Boxelder bugs can build up to very high numbers on the female (pod-bearing) boxelder trees where they feed on seeds and leaves. They don’t feed on the male trees.

Boxelder trees can be power-sprayed to kill nymphs in early summer, but the best way to permanently eliminate the problem of overwintering boxelder bugs is to cut down the female boxelder tree. Boxelders are not normally considered to be very desirable trees, and many homeowners don’t even realize that they have one on their property – until they have a boxelder bug experience.

Control Boxelder Bugs Before They Get Inside

Once boxelder bugs are already inside and hiding in cracks and crevices, control is difficult. It’s much better to be proactive and intercept them in the fall before they have a chance to get inside. In early fall, the bugs cluster on the sunny sides of tree trunks, rocks, and buildings. This is the best time to have a pest control company treat around the exterior of your home, while the bugs are clustered and before they disperse to move inside. Caulking and sealing around doors and windows and outside vents to keep them out is also a good idea.

Boxelder bugs that are hiding inside will make a reappearance in spring (or sometimes on warm days in winter) as they look for a way to get back outside. They can usually be removed with a vacuum cleaner but they can give off a foul defensive odor if crushed. Plan ahead to eliminate boxelder bugs early next fall.