Some of Those Colorful Caterpillars Can “Sting!” 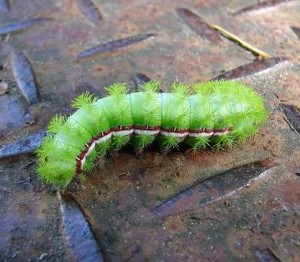 Is there such a thing as a stinging caterpillar? My son picked up this big, spiny, bright green caterpillar and it seems like it stung him somehow. He said it really hurt and he ended up with tiny blisters on his hand.

There are stinging caterpillars and it sounds like your son may have made acquaintance with the larval form of the io moth. These caterpillars don’t have a stinger in the traditional sense like a wasp does, but what they do have are urticating hairs on their bodies. These hairs are designed to protect them from their natural enemies. The hairs are actually sharply pointed spines, sometimes with a poison gland at the base. When touched, the hairs break off and the poison is injected, causing inflammation, blistering of the skin, and a burning sensation which may feel much like a bee sting. The skin reaction can last for a day or two and can be more severe if the eyes, nose, or mouth are affected. Young children may experience fever, nausea, and other symptoms, especially during the first few hours.

Even the hairs of common caterpillars, such as gypsy moths, can cause skin rashes in sensitive people. The caterpillars don’t even have to be handled for irritation to occur. The hairs may come from cocoons or be blown by the wind. Not all colorful caterpillars have stinging hairs but it’s probably a good idea to tell small children not to pick up any hairy, unknown caterpillars. Fortunately, stinging caterpillars are uncommon around homes and yards. Most feed on native trees and shrubs and are found in wooded areas. Apply a piece of any type of sticky tape to the skin, then immediately pull it off to remove any spines still in the skin. Repeat, but use a new piece of tape each time. Wash the affected area with soap and water. Apply an ice pack to relieve swelling and burning.

There are several different caterpillars that have urticating hairs, but two of the most well known “stinging caterpillars” in our area are the saddleback caterpillar and the io moth caterpillar.

This caterpillar is not fuzzy or spiny-looking, and hardly looks like a caterpillar. It has a striking green “saddlecloth” shape on its back with a purplish-brown “saddle” in the middle. It also has bristly, irritating spines. It uses its spines, bright coloration, and fake eyespots to warn away predators.

This striking caterpillar is large when fully grown (about 2-1/2 inches) because it turns into a very large, colorful moth. It is bright lime green with red and cream-colored stripes down the sides and four rows of stinging spines that run the length of its body. The larger the caterpillar, the more intense the stinging sensation.