When Yellowjackets Nest Inside Homes!

Q. We had a really scary thing happen last summer. Yellowjackets emerged from a hole in the wall into my daughter’s bedroom!  A pest control company was trying to treat the nest that was inside the walls but I guess it drove them out into her room instead. Then we had a real mess. My daughter was stung twice and we ended up having to rip the wall open to remove the nest. Was this a rare occurrence or is there a chance this could happen again? We do see lots of yellowjackets outside around our house.

A. It’s not such a rare occurrence to have yellowjackets nesting inside a house. More and more, they seem to be adapting to live in man-made voids rather than in ground nest holes. It should be a rare occurrence, however, for yellowjackets to emerge inside the house. When yellowjackets nest inside buildings, in wall or ceiling voids, in concrete block, or in attics, they come and go through a nest opening on the outside of the building. Often, inhabitants don’t even know that there is a yellowjacket nest in their home. 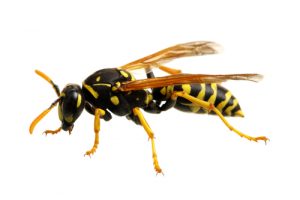 Yellowjackets will enter a building void through a hole in mortar, space around a window frame, or an opening around a spigot, conduit, vent, or exhaust fan, for example. But finding the yellowjackets’ entrance hole doesn’t mean you’ve found the nest. It may be only a few inches away inside the void, or it can be as much as 30 feet from the entrance hole. Finding the location of the nest and then getting the injected insecticide to reach the nest can be a challenge for a pest control company.

Sometimes, if the yellowjacket nest grows too large for its void space, the yellowjackets will try to chew their way into another space and can end up inside a room. In your case though, the insecticide treatment of the nest apparently went slightly wrong. If the outside nest entrance is blocked after treatment but if the treatment has not killed the yellowjackets in the nest, they will try to find a new way out and can chew an opening through plasterboard to escape.

Yellowjacket nests inside wall or other building voids don’t always have to be removed after the nest has been treated and the yellowjackets killed. It depends on the nest location, how expensive and difficult removal would be, and the time of year (or age of the nest), among other things. Since the bedroom wall was already damaged, it made sense to remove the nest at the same time that the repair was done.

Except occasionally in the warmest areas of the U.S., yellowjackets do not re-use nests from year to year. The workers die at the end of the summer season, along with the current queen. But your house and yard may be a desirable nest site for some reason so we can’t rule out the possibility that you could have another void nest at some time, in some different location. If there is an opening into your home that yellowjackets have used in the past, you should consider sealing it off.