What is an Insect Pupa…And Why Should You Care?

The insect pupa (pronounced pew-pah) is a transition stage between the immature insect and the adult insect. Not every insect goes through a pupal stage. Only those insects that undergo what we call complete metamorphosis have a pupal stage as part of their development. These are the insect groups in which the larva looks very different from the adult—flies, wasps, ants, and beetles, for example. Other insect groups in which the young insect already looks like a small version of the adult, such as crickets and cockroaches, do not have a pupal stage. 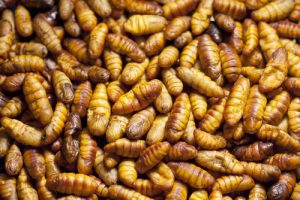 When an insect larva is fully developed, it stops feeding and looks for a protected place to spend its pupal stage. Some insects, like moth larvae, spin a silken cocoon in which to pupate. Other insects, like the house fly, pupate inside a protective leathery case.

During the pupal stage the final change to the adult form takes place. Although some call it the “resting stage,” the mummy-like pupa is not really resting. It’s busy developing into an adult insect. Inside its last larval skin, it’s changing form and growing wings and legs, and developing sexual organs. While most pupae are motionless, a few like the mosquito, can move around during the pupal stage. It hangs from the surface of the water but can send itself into a tumbling dive to the bottom if disturbed.

The length of the pupal stage varies. For most insects, it lasts only a matter of days. But some pupae (the plural is pronounced pew-pee), fleas for example, can remain protected in the pupal stage for an extended time, even months. When conditions are right, or when a host animal is nearby, the pupa suddenly leaves its case to continue life as an adult insect.

The pupal stage of insects presents a special problem in pest control because the pupa is often protected from pesticides inside a cocoon or skin. It also doesn’t move around so it’s not going to wander across pesticide on surfaces or feed on baits. When pests appear after treatment, it’s often the result of adult insects emerging from the protected pupal stage days or weeks after treatment. It’s also one of the reasons why we often need to do follow-up service after an initial treatment—to get those insects that were in the pupal stage at the first treatment and have since turned into adults.